I have an unhealthy relationship with keyboards. In fact, I've been obsessed with mechanical keyboards since my first encounter with a computer in the 90's. I love the way they feel, the sound they make, fiddling with firmware, picking out switches and keycaps, and the friendly communities around them.

Also, modern keyboards really suck. They're ugly, their switches don't work as well, and they're generally treated as throw-away devices. I don't like that.

And since I can't get enough of them, I thought I'd share some of my current collection in case anyone else was looking for a new keyboard.

Acrylic Alice (based on TGR Alice) 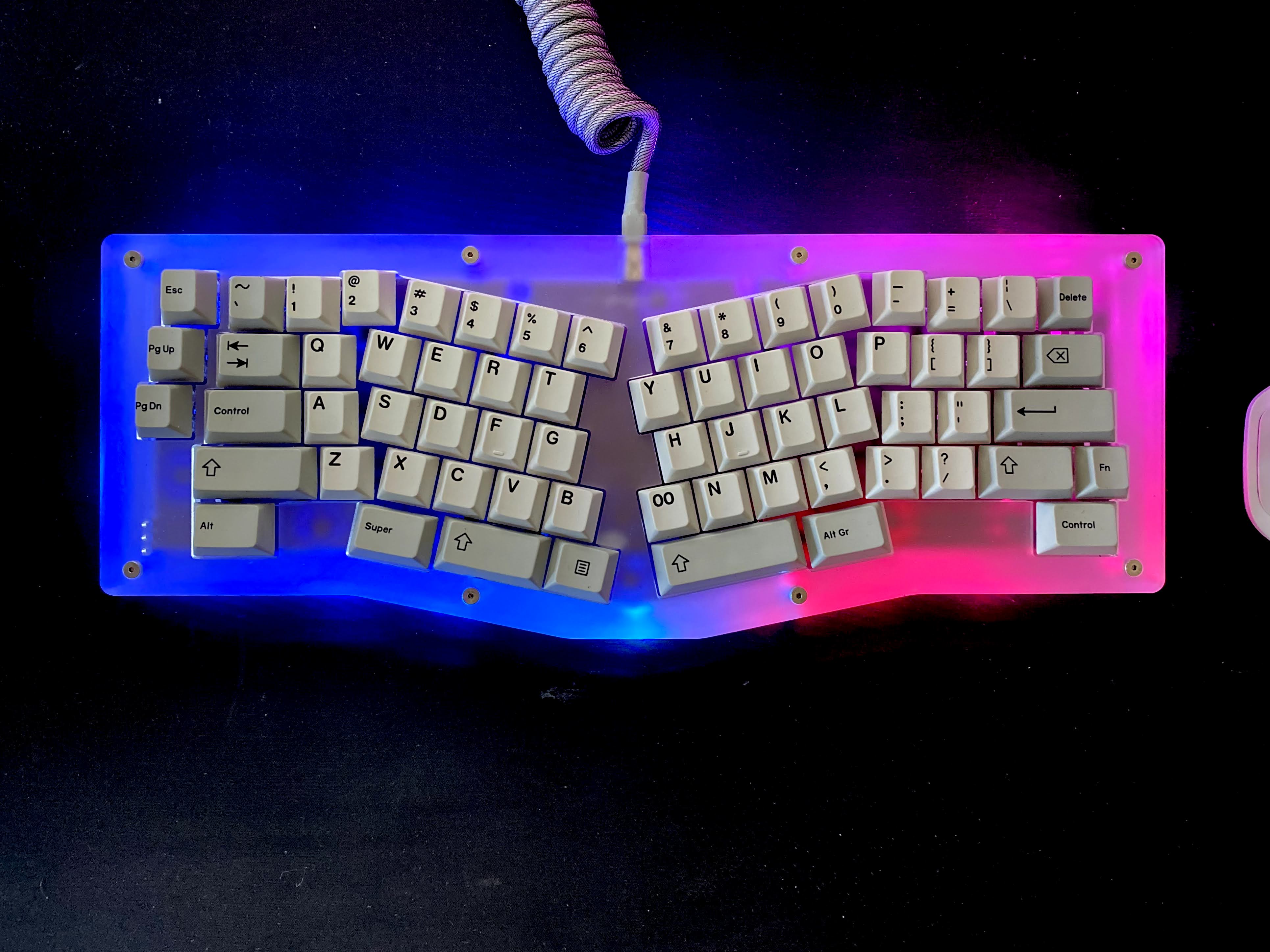 My acrylic alice is my first fully-custom, "I had to purchase every little thing and solder it myself" keyboards. I waited for many, many months to get the PCB, and then I waited about a month to receive the custom clear acrylic case. And even then, it took me about a month to find a free day to solder it.

If that wasn't enough, the original PCB went bad, so I had to purchase another one...and wait months for it to arrive, only to desolder the original, and solder the new one. It was a real labor of love. But it was worth it.

I LOVE this keyboard. The split-ergo layout, the keyswitches, the way it distributes the under-switch LED lighting...everything. It's a dream to type on all day. It sounds great due to the switch type combined with the acrylic case.

In fact, I've already purchased and received another one to build. This time, I went with a fully-black, "murdered" out "Malice" color scheme. Just need to find the right keycaps for it... 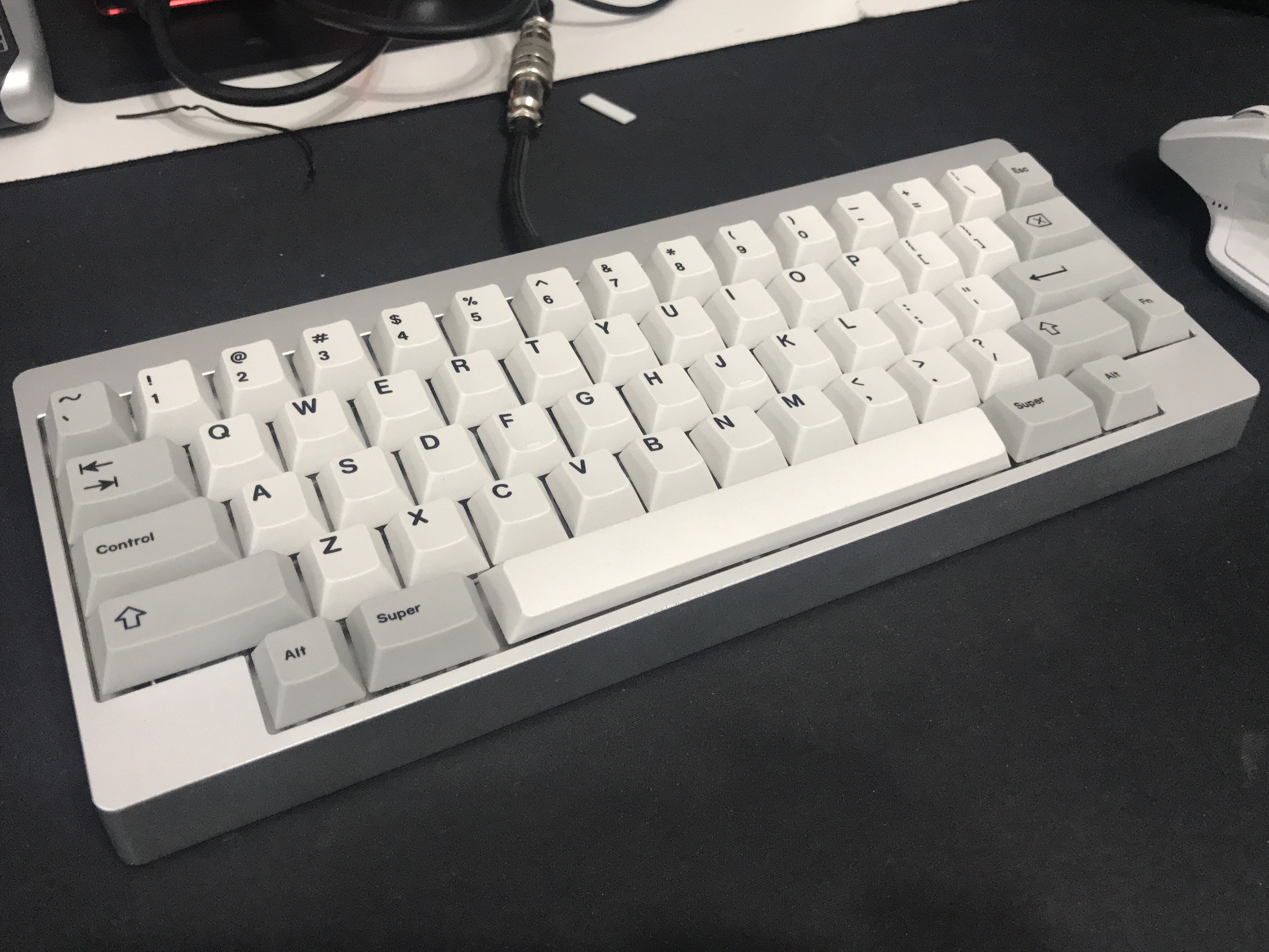 My M60-A is one of my daily drivers. It's also the most expensive keyboard I've ever bought at around $500 shipped.

Why buy a keyboard which costs that much? Simply, it's very, very nice. The industrial design is top-notch, the packaging is insane, and the thing is just so well-built.

Because this keyboard is fully programmable via QMK, it's running custom firmware (written by me), which allows it to use a modified HHKB layout.

~~Internally, this keyboard uses Kailh Box Navy switches which are very heavy and very loud. The heavy clicky switches are really pleasant to type on for those long days of answering support and programming. Your coworkers would hate you for using it, but thankfully I work at home.~~ I recently rebuilt this keyboard to use Purple Zealios V2 tactile switches from Zeal Generation like my acrylic Alice. 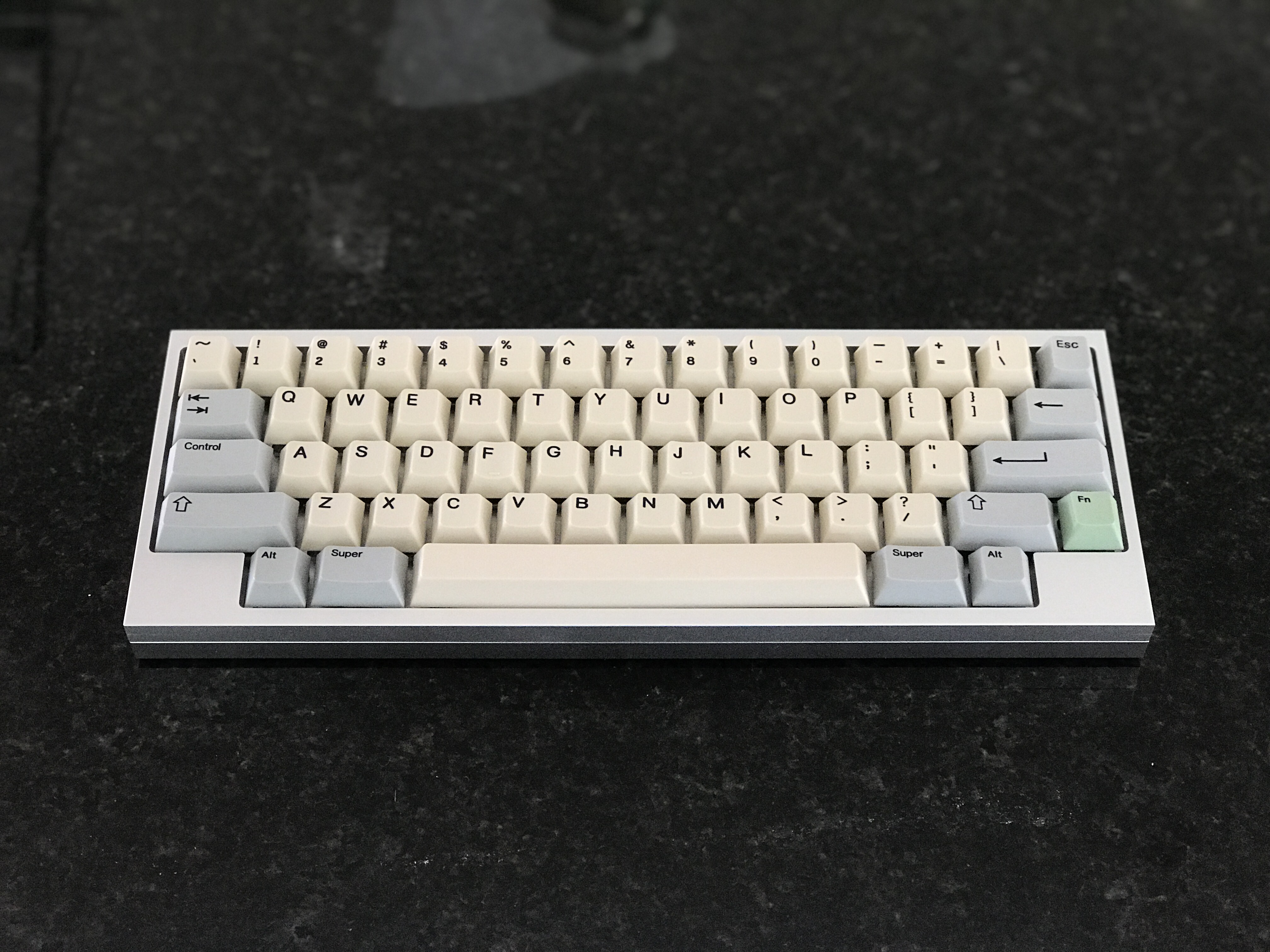 Here's another one of my recent acquisitions. It's quite a bit more affordable (on the spectrum of expensive custom keyboards), coming in at around $300.

I recently rebuilt this keyboard to use Aliaz Silent switches, which are quite a bit different to type on than clicky ones. It's very quiet and smooth, except for a barely-noticable tactile bump when pressing the switch down.

Again, this one uses my modified HHKB layout. It's also fully programmable via QMK and supports RGB underglow if I ever decide to get an acrylic bottom case to let the light shine through. 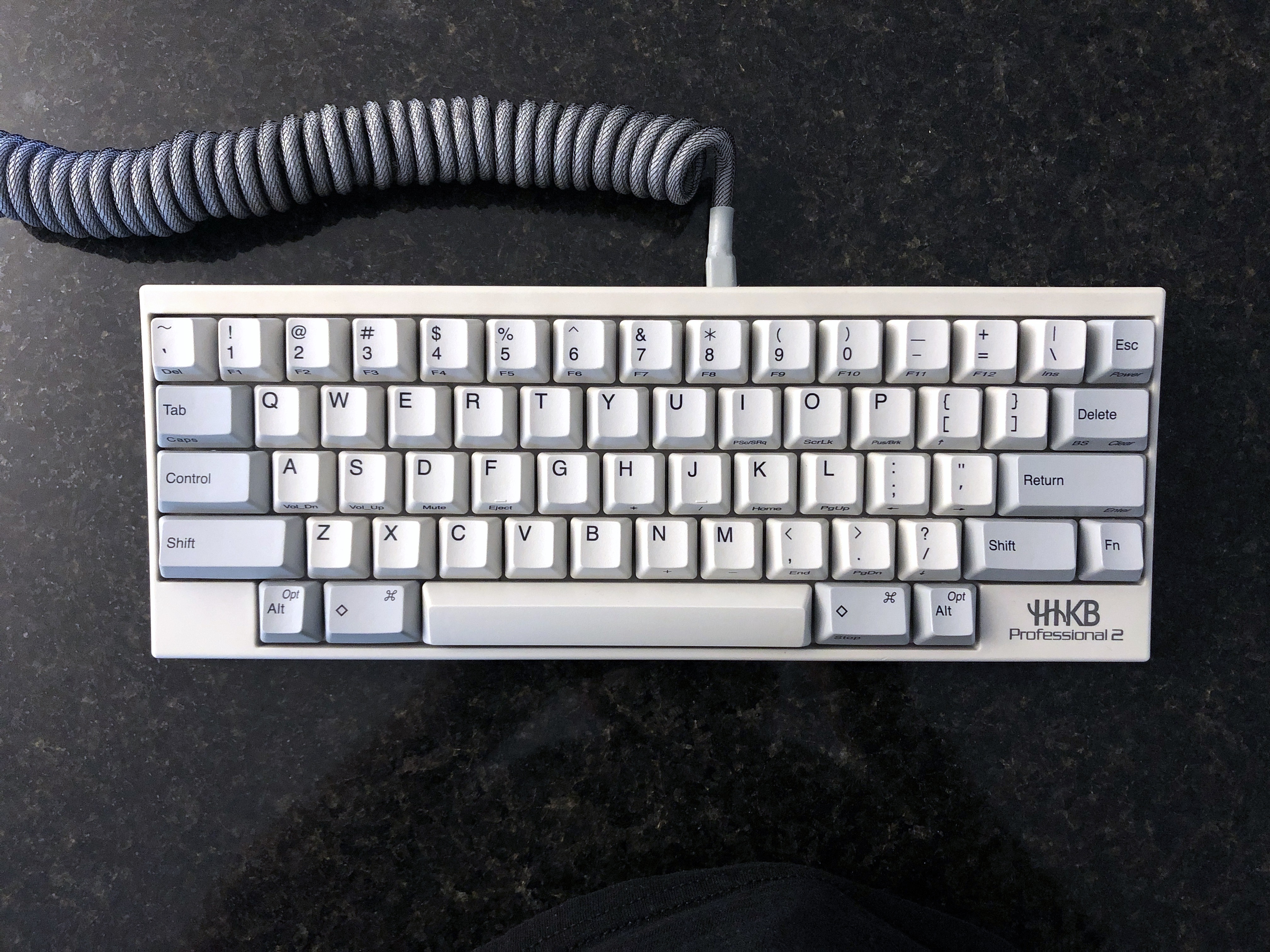 I wasn't always in love with the HHKB layout. I've actually had two of these keyboards. The first one was an all-black version with black keycaps with black lettering. This one in fact. I could not get down with it. My previous home office was very dark and though I'm a decent touch typist, at times I found myself needing to look at the keys. Black on black with no backlighting made using this difficult, especially when it's a new keyboard with a weird layout. I wound up sending it back.

My second foray into the world of the HHKB has been way better. I installed a custom HASU controller board inside it, which allows for full programability via QMK. I picked this up off of r/mechmarket for about 40% off what you'd normally pay brand-new. It also came with the cool gray coiled cable. I bought up some fresh stock keycaps because it was missing a couple.

What makes the HHKB special is its layout and its Topre switches. Here's an interview with the creator of the keyboard explaining his philosophy for creating the keyboard.

The switches are what's known as Topre switches. They're not technically mechanical but rubber-dome switches, which also makes the HHKB not a mechanical keyboard. But the feeling of typing on these switches is unlike any other keyboared. 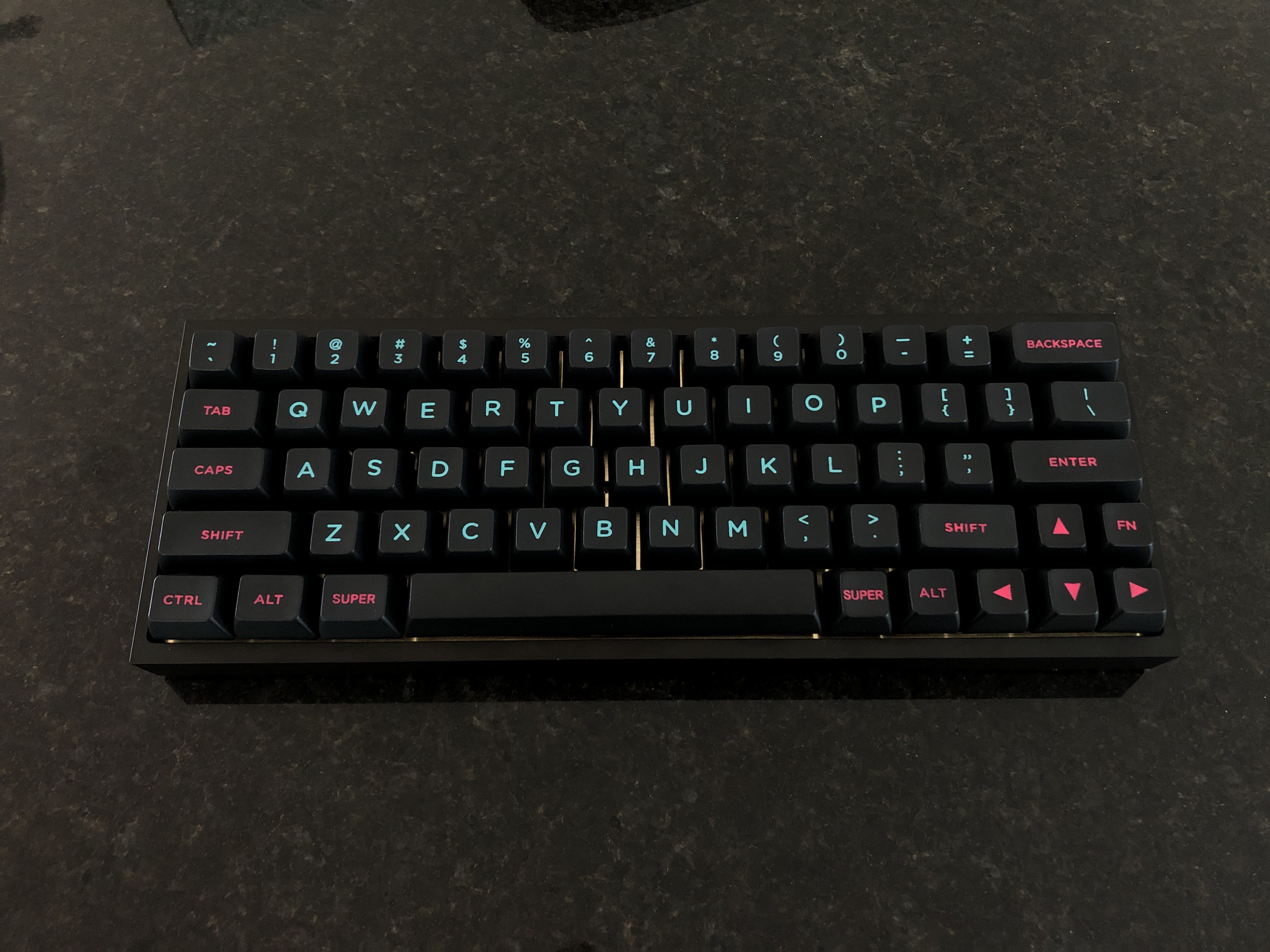 This custom keyboard was a bit of a disappointment, but I'm going to rebuild it to hopefully make it a loved member of my collection.

I bought this keyboard because I wanted to see if I liked a traditional 60% layout over the HHKB one. I've grown quite fond of the HHKB layout, and this keyboard has arrow keys, an extra Ctrl on the bottom row, and a conventional backspace key placement, which is hard to get used to after using HHKB layouts. The arrow keys are nice theoretically, but I havn't really used them.

The aluminum case also makes a very-loud metallic sound when you press a switch, one that I've described to some folks as the sound of "teeth grinding on a paved road". Obviously, that's not great, so hopefully some internal sound dampening, lubing the stabilizers, and putting some really clicky Box Navy switches will make this one usable. 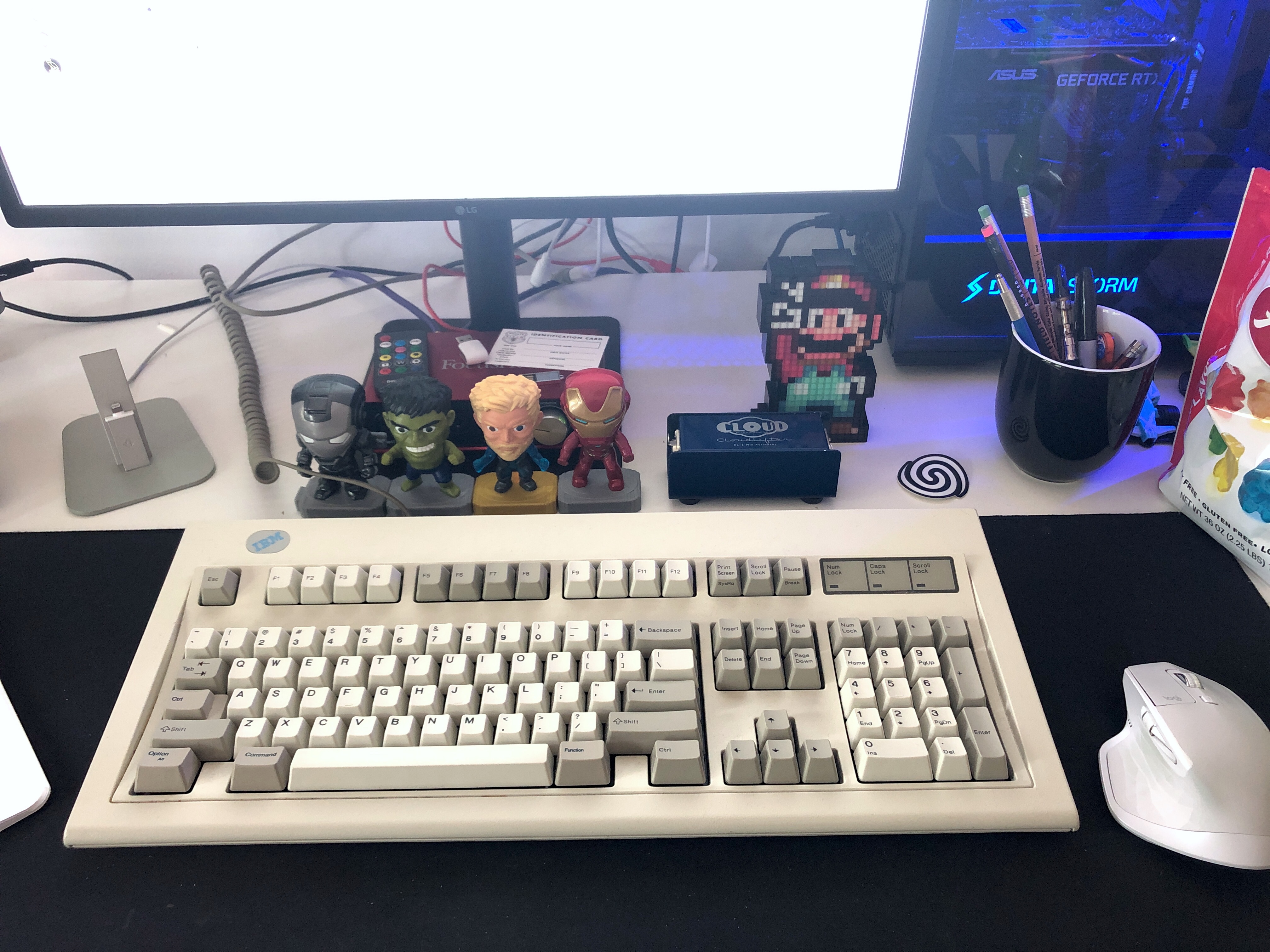 The IBM Model M was the first keyboard I remember really feeling a fondness for. It's huge, heavy, loud, and really makes you feel like you're getting work done when you're using it.

This keyboard has been around since the early 90's. You can see it's birthdate right on the back: 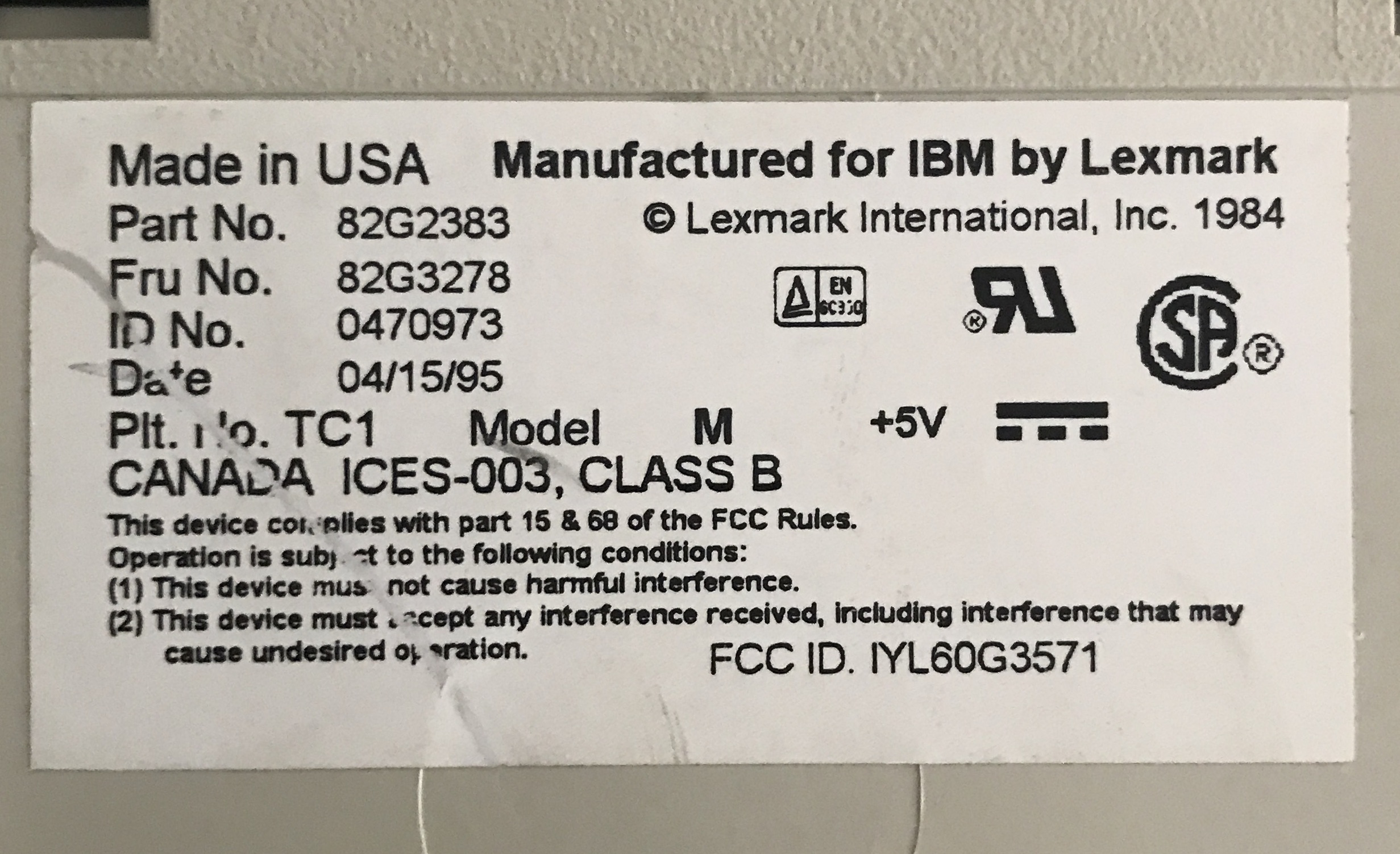 I don't really use this keyboard much these days since I have some fully-custom keyboards available in much-smaller packages, but I can see myself holding onto this keyboard for a long time. 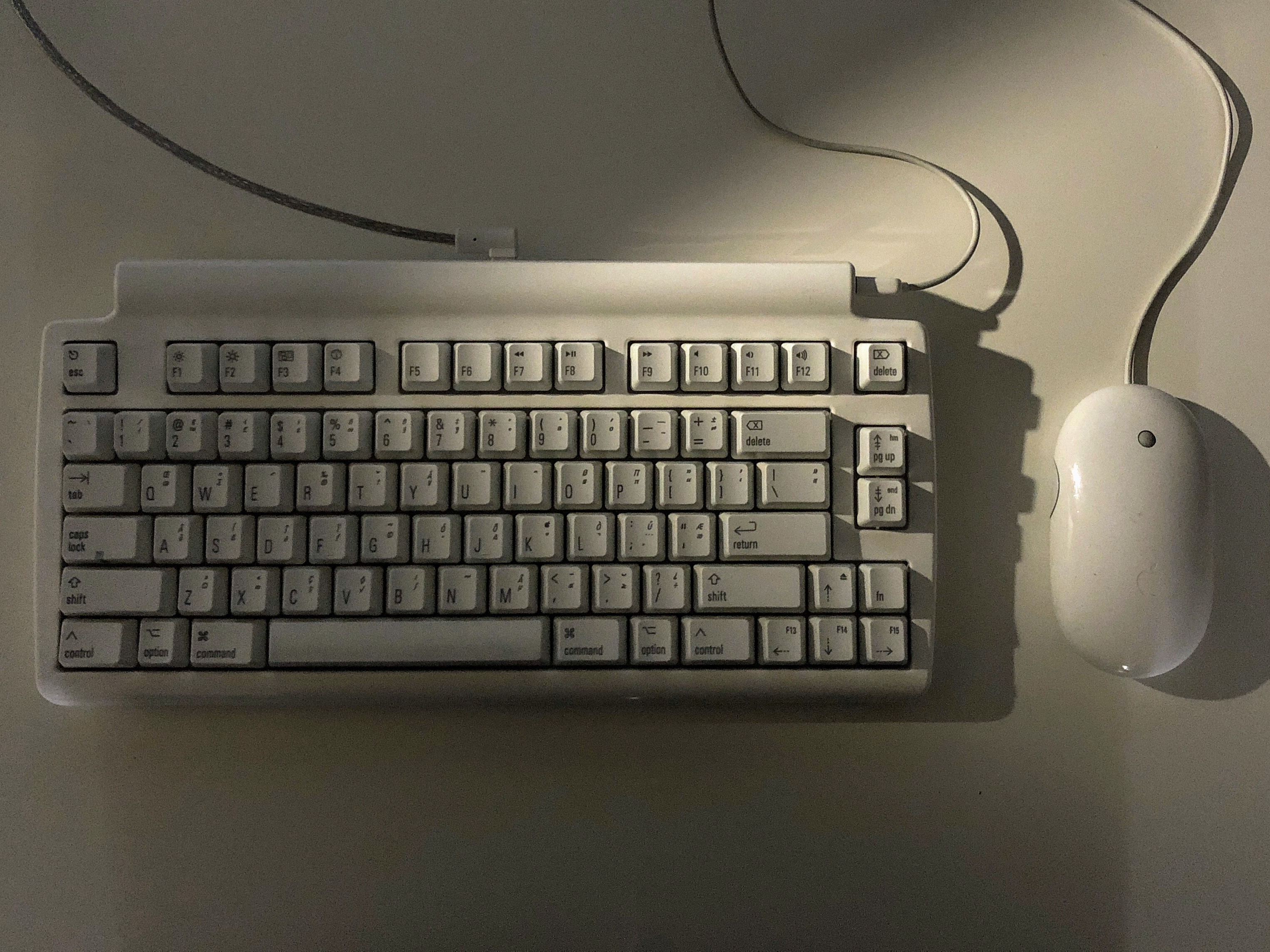 I like this keyboard simply because it supports a proper Mac layout. It's also super cheap and easy to get, which makes it a solid pick. The Alps keyswitches are clicky and loud, but compared to nicer switches are actually quite squishy. 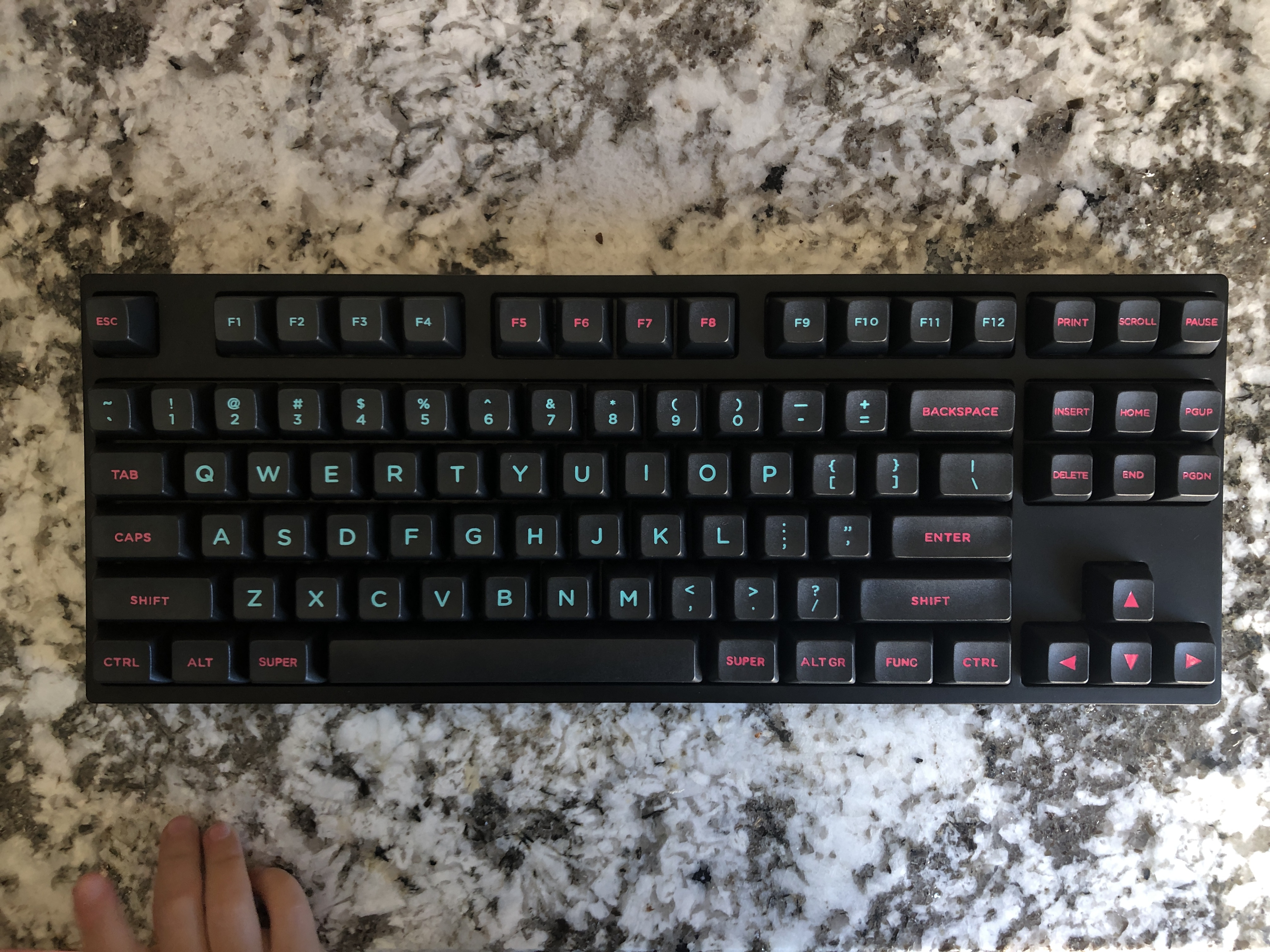 I accidentally killed this keyboard in its prime. I was making my own custom coiled cable and wired a cable incorrectly, causing it to short the PCB somewhere.

It was one of my first mechanical keyboards, and one of my favorites. It has Topre switches as well, which are usually not compatible with MX-style keycaps. But this keyboard was special: it had MX-compatible sliders, which allows it to use use MX-style keycaps, This greatly increased the amount of keycaps available to put on it.

Thankfully, the stems are desirable on the second-hand market for converting other Topre keyboards. So I could sell them, but I may actually use the stems to one day convert my HHKB to use MX-style keycaps.

↑ Back to the top